HA HA - This page is pretty much a historical document at this point. I currently use a couple of GoPro Hero 8s, a gimbal and a drone. I'm leaving most of this page as is for now.  I will be a new page for just do up a YouTube video on my current way of doing things which is not that much different than the rest of the GoPro community.  MY CHANNEL

Making videos is quite a bit of fun.  It is a great way to show your NON-MTB family and friends what you are so into.  It is also great for explaining how you came to have the latest boo boo.  Additionally, sooner or later you and your friends are going to crash while the camera is rolling which is always good for some laughs.

I first started this page back in "The Day" when video taping your MTB rides was a much harder deal. The Go Pro Cameras have shifted the landscape for MTB videos offering super compact cameras that produce quality video. Additionally online video hosting sites like Vimeo and YouTube have gotten much better in the quality department compared to what was offered 10 years ago. There are so many permutations of how to do things, my current advice would be to Google your your camera and video tutorial and you will have a plethora of material to dig through. I'm really keeping this page on the site for my historical purposes.

This How-To should give the basics needed to save those precious moments so you can laugh at yourself and torment your riding buddies for many years to come.  I would be remiss if I did not point out that Pete Fagerlin was on one of the first folks to do the Helmet Camera thing on a Mountain Bike and he has one of the best Mountain Bike Video making how to I have found.  While not trying to rip off his work, when you have the optimal way to do things already figured out it is going to be emulated.

So with all that said, here is the How-To Part

The Helmet-Mounted Camera method is just that, a camcorder strapped to your helmet.  You will need a smallish camcorder.  I have a Sony DCR-PC-9, but I almost bought one of the Canon ZR line of miniDV camcorders.  To get the camcorder on my helmet I bought an "X-Jacket" enclosure from ThinkHelmets, but they can also be purchased through Sky Systems LTD. (I believe these are at least affiliated companies, if not one and the same).  I almost purchased an enclosure from Bonehead Composites but ultimately I liked the look of the X-jacket better.

There is real easy trick to determining if you are using the right amount of counterweight.  Take your best guess see if it feels right on your head.  Then go for a ride.   After about 15 minutes of riding you should have a good idea of what to do.   If your neck feels fine - You have done it right.   If you have an excruciating pain in the left side your neck, add some weight.  If the pain is on the right side, take a little out.   When setup just right you should be able to ride around for an hour or so without have to give your neck a breather.

One of the upsides to this setup is no wires to fiddle with and stopping at starting the camera is much easier as you do not have to go digging in your pack.  Also you do not have to orchestrate putting on your pack and the helmet at the same time.  One of the downsides to this setup is that you have a lot of weight up on your head that is sure to give you a sore neck until your neck muscles are built up. 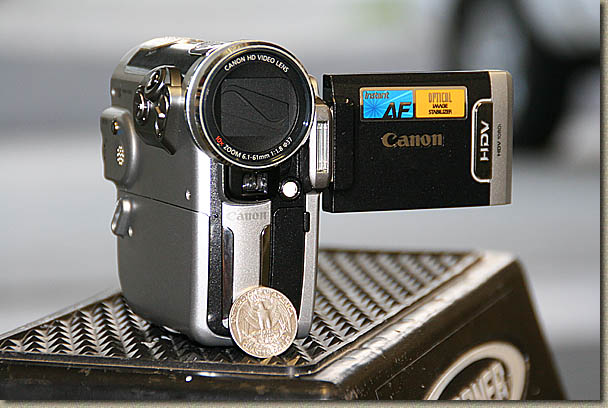 In early 2007, I switched to a High-Definition Camcorder (HDV), a Canon HV10.  It has been quite a learning experience switching to the new format.  While the video is incredibly awesome to view if you have an HDTV it is not without drawbacks.

I have learned to compensate for the stabilization somewhat with my on-bike riding style.  Staying off the saddle and being extremely loose with using my body to suck up trail bumps.  This style uses more energy and creates leg and arm pump much earlier in the ride.

You will need some serious horsepower to edit HDV.  A dual core processor running at 3+ GHZ. 2 GHz of RAM, stripped SATA hard drives (At typical HDV project can get upwards to 100GB in size) and at least a 256MB video card.   Also you will need software that supports HDV.  I use Adobe Premiere Pro 2.0, and will move to 3.0 when it comes out.

Tons of information this stuff is available at DVinfo.net  I'll update some more as my adventure HDV continues.

I needed to retire the helmet portion of my old helmet cam setup as I had simply worn it out. The adjustment mechanism on the back of the helmet was shot and overall the helmet looked pretty worse for wear. I have been tinkering with a new helmet camera mounting design that would allow me to get away from having a dedicated helmet for the camera system. Wearing the helmet camera on long climbs when you are not filming is a bummer so I would often carry a second helmet. I wanted carry a single helmet and be able to quickly attach or remove the camera gear during the course of a ride. The new setup basically uses the quick-release mounts designed for professional/prosumer grade camera tripods. I find it much more versatile than before.

I have used a GoPro Hero 2 when they first came out. They were completely substandard to even the standard definition camcorder I had at the time. I currently have a GoPro Hero 3 and a Hero 3+ Black Edition that I have shot footage with. I have not published a video yet shot with GoPro footage. There are a variety of reasons for this but the primary reason is I'm just kinda burnt out on videos and editing the videos does not provide the same kind of creative outlet for me that it used to. Make someday when I crash and break a leg I get back into it. The quality of the Hero 3, 3+ is very good. However, I still feel that the full camcorder offers some advantages over the GoPros. Primary of these is the optics. Bigger Glass - more light and a speck of mud or sweat on the lens is not going to screw up so much of your image like what happens with the tiny lens of the GoPro. The second item is image stabilization. The GoPros do not have image stabilization in the camera like the camcorders do. So far all of the software image stabilization solutions I have seen crop too much of the image down and they produce some distortions that I just don't care for. Will I go back to using a real camcorder? It is highly doubtful that I will as the small size of the GoPros out weight the better quality of the camcorders.

No matter what method you went with, it is time to go ride and shoot some video.   While there are absolutely no rules for what you can do, there are a few guidelines that can help you out.

Get the video into your computer

Getting the video into your computer depends primarily depends on wither you have an analog or digital camcorder.

For analog camcorders you will need some sort of capture device

When I first started making videos I was using a capture box that plugged into a parallel port  made by Dazzle.  It allowed me to capture any analog A/V source into a MPEG formatted file with a max resolution of 352 by 240.  If you look at Dazzle's product line my gizmo is comparable to the current Digital Video Creator 80 product.

I latter upgraded my video card to the ATI All-In-Wonder Radeon 8500DV 64MB video card that allowed me to capture up to DVD quality video in a variety of formats.  It also has two integrated firewire ports as well as a bunch of other goodies that is is useful if you have a MiniDV camcorder.

For digital camcorders all you need is a Firewire card

Digital (Primarily miniDV) camcorders have a Firewire port (Sony calls it iLink, and it is also called a 1394 port) which allows for the digitally recorded video to simply be "transferred" from the camcorder to the computer and saved as an AVI file which you can then edit in your computer. Most editing software includes the ability to pull data off of the digital camcorders 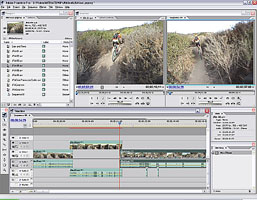 Once the video is in the computer I use Adobe Premiere Pro to do the editing and exporting. This is where you need to pick out the interesting stuff and dump the rest of it.   This is also where you want to throw in some transitions, some tunes, a title, and maybe an effect or two.  The general consensus is that five minutes of a lung busting climb is generally not as interesting as 15 second a technical singletrack descent.   Creativity in trying to capture the essence of the ride is generally what I shot for.

Adobe Premiere is not cheap and there are many other options.  Microsoft Movie Maker 2 is free and while it has no where near the features of Premiere, it will get the job done.  If you have an Apple/McIntosh, there is always the Apple iMovie software which is free as well.   Ulead Video Studio and Pinnacle Studio are often bundled with capture and video cards which makes them almost free and I hear they are quite adequate.

There are tons of resources and tutorials on the net to assist you in learning how to do desktop video.  Here is a good Desktop Video 101 page to get you started.

Wither your final video is going to be on tape, CD, DVD, or posted on the web, you have to get your video out of your software and onto so sort of media.  There are a thousands of permutations of software and desired export media.  If you do a Google search on Exporting Video you will get plenty of good information on the subject.   While there are many video formats used on the web, I'm using the Windows Media format (WMV).   I used MPEG for a long time, but I like my results with WMV format better.    I know you the iPeople (Mac Users) gripe about the WMV format. Just for the record, I got nothing against the Mac crowd, but you represent less than one percent of the operating systems hitting my site.  iSuggest you enjoy a cup of iCoffee why you use some iSoftware to convert to whatever iFormat you like.    I am going to discuss how I do things with Premiere.

When I am done with my video I usually end up with three copies of the video in different formats.

So now you have a web-sized version on your video.  To get the world to see it you need to post it to a website somewhere.