Located near Escondido the Mule Hill and San Pasqual Valley Trails goes between Lake Hodges to the west and along the agraculture fields to the east in San Pasqual Valley. It is often colloquially referred to as Raptor Ridge which is the is high point of the ride wither you start from the eastern or western end. There is a little something for most XC style riders as beginners can enjoy non-technical relatively flat terrain on either side of the Raptor Ridge and work their way into climbing the ridge. Intermediate riders should be able to appreciate the 20 miles that can be ridden as an out-and-back as well as being able to combine this trail with numerous combinations of the Lake Hodges system and beyond as well connections into Poway and Coast-to-Crest trail systems. 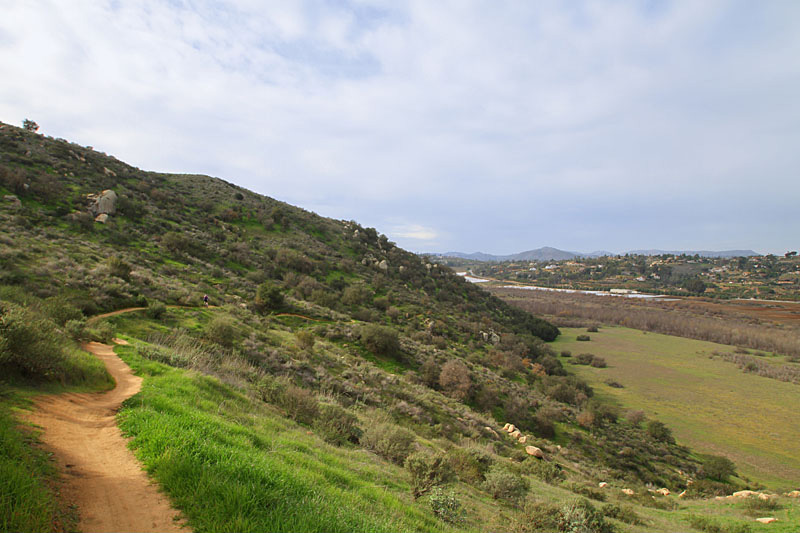 Hazards: Water is not available out on the trail so make sure to bring enough.

GPS Files for all trails in area:

Ride Notes: The route file starts from the Bandy Canyon Trailhead (East End).  The description below is for starting at the west end of the route.   No matter which end you start from the navigation is fairly easy and I am assuming you are using some kind of electronic navigation aid.   This ride can be shortened to 10 miles  by just turning at the top of Raptor Ridge regardless of which end you started from.

Starting from the Sunset Drive trailhead by Interstate-15 (Also one of the Lake Hodges Trailheads), pickup the trail (Its a wide dirt pathway at this point) heading east from the end of the end of the street. It is well marked. the pathway passes by one of the parks ranch houses along with the backside of a driving range then briefly parallels the road before turning south. The trail is called the Mule Hill Historic Trail for the first 1.4 miles. It is named to commemorate a battle in December of 1846 during the Mexician-American War where the embattled and trapped Americans troops short of supplies had to resort to eating their mules. The trail has several kiosks that describes the battle and history of the place. The trail climbs over a small hill and turns to the east. While there are no signs reflecting the name change, at 1.4 miles when the trail becomes flat and parallels an agriculture field fence it switches from being the Mule Hill trail to being the San Pasqual Valley trail. The trail (more of a doubletrack at this point vice a sterile pathway) follows this fence line for a little over a mile and then crosses the follow. At 3.15 miles you will come to a junction where you can goes out to Highway Valley Road. Bear to your left twice within a hundred yards to stay on the wide doubletrack that is now going north. 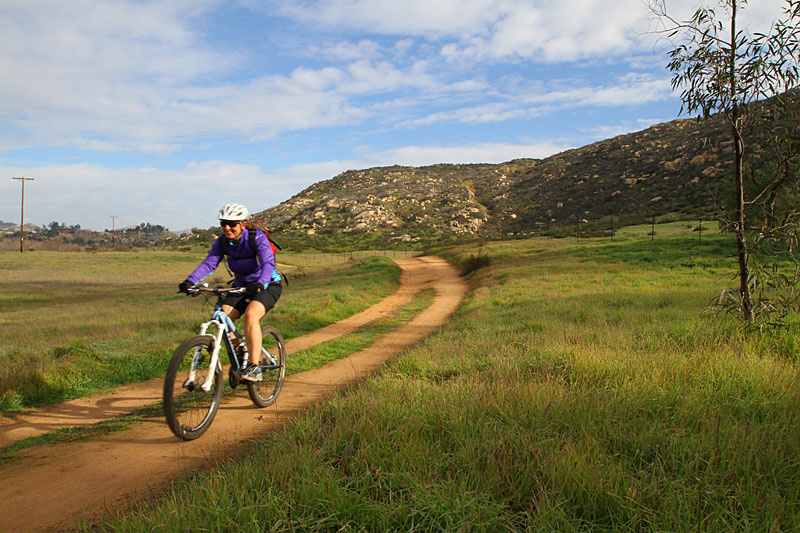 The doubletrack will continue north for 1.25 miles where it come to kiosk and a picnic bench. The trail transitions to singletrack and starts working its way up Raptor Ridge. This is a nice section of singletrack that get fairly steep early on. The steep grade is not unrelenting as the trail kinda stair steps it way up the ridge. The climb lasts about 3/4ths of a mile until it reaches a view point area. Your total mileage at his point should be around 5.2 miles at this point.

This is a common turn around point. Continuing on from here the trail descends down and around the north finger of Raptor Ridge before turning eastward. The steepest/loosest bit is right near the top but it then mellows. As you descend down Raptor Ridge broader views of the San Pasqual Valley open up and you can a variety of Agricultural uses going on. The valley is called an Agricultural Preserve. I don't know exactly what that means but it sure looks like "Farms" to me. (There is probably more grants, government handouts, and tax breaks for a preserve vice a farm). The trail through here is old doubletrack that mother nature is working on turning back into singletrack. The descent is about 3/4th of a mile long where it become a mellow slightly rolling doubletrack along the south side of the valley. I have ridden worse doubletrack as the views across the valley are kinda cool. 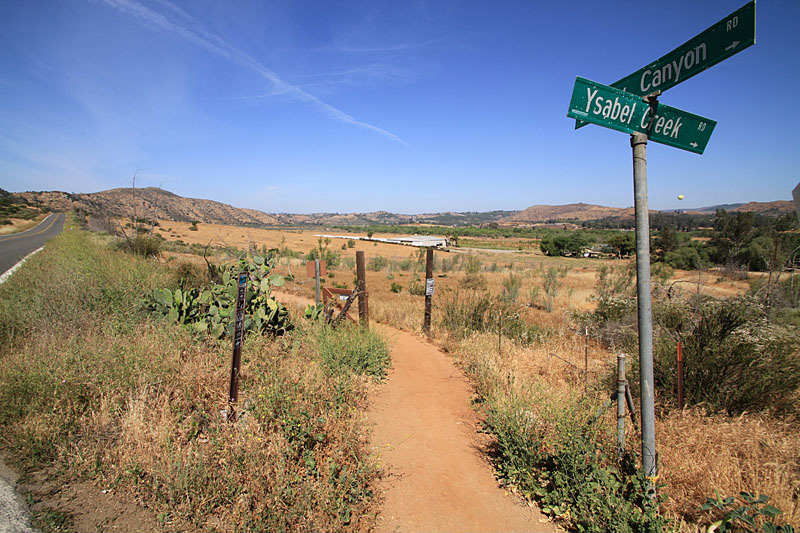 Just six miles ago where you were right in the hustle and bustle of a busy interstate and the comings and goings of the North County Mall trappings. The country scenery of San Pasqual Valley seems a lot further than six miles away. At 6.8 miles the doubletrack comes out on a farm road and the trail crosses over the road and turns uphill. Shortly there after the trail starts to parallel Bandy Canyon Road. The trail is offset about 10 feet from the road with wood rail fencing between the road and the trail which consists of mostly gravel. While I'm no fan of the this kind of "trail" the scenery of the valley compensates for it. After about a quarter of mile of the roadside gravel deal, the trail moves a little further away from the road and transitions back to natural dirt. At 7.42 miles you will roll through the Ysabel Creek Trailhead. From here the trail is out of the view of Bandy Canyon Road until 8.1 miles where you will cross over a bridge. Since I first started riding out here, the San Dieguito River Park has made some improvement to the trail. One of those is this bridge. They have added a wooden and metal extension off to to the side of the bridge so trail users don't have to use the narrow bridge and compete with vehicle traffic.

For the next 3/4th of a mile beyond the bridge the trail is right beside the road and passes in front of the Verger Dairy complex. What the trail lacks in pretty much all aspects of being a trail is compensated by the farm scenery. There are just not that many trails that roll by working dairies here in San Diego. According to their field rotation, there maybe cows right on the other side of the fence. At 8.72 miles the trail gets some fenced separation from the road as well as segments of being out of sight of Bandy Canyon Road.

At 9.27 miles the trail turns north and goes between an expansive sod farm field on your left and an orange grove on your right. The trail will turn to the east and follow the northern edge of the orange grove to the San Pasqual Valley trailhead off of Bandy Canyon Road at 10.2 miles. This is your turn around point. Retrace you way back the way you came for a total of 20.4 miles.