Are you ready to get your climb on? Located at the far north end of San Diego County, This is the less traveled side of Palomar mountain. This ride will certainly give you a workout as make your way up the mountain to unique views on the San Diego back country and numerous peaks and ranges to the north. It will also give you a view of the Palomar Observatory that less adventurous people will simply never see. For those of you who are fans of Nate Harrison Grade on the south side of the mountain, you will certainly enjoy this climb. While nearly the entire area that Nate Harrison climbs through burnt into the 2007 wildfire, this area and the High Point truck trail did not. 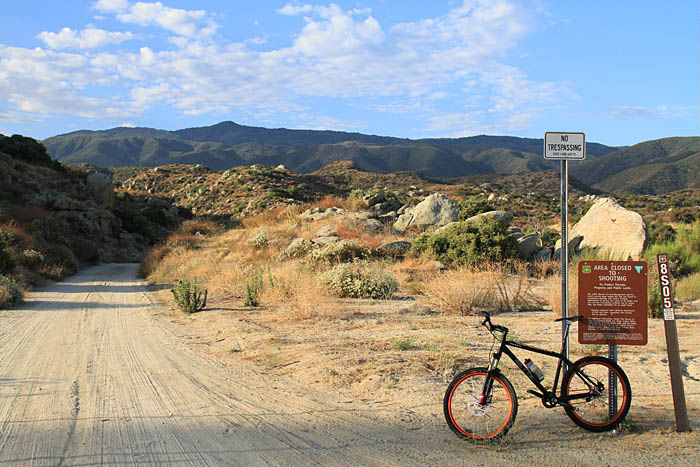 This is the start of the High Point Truck Trail, Forest Service Road 8S05. The highpoint you see on the top of the mountain in the distance, that is High Point, your destination. It is 12 miles and about 4,500 feet climbing away.

Hazards: There is no water along this route, even at the lookout tower. It can get really hot at the lower elevations during the summer and during the winter you can have snow to contend with in the higher elevations. Vehicles are normally allowed on this route but some seasonal closures for motorized access may and often occur so be alert for them. There are opportunities for stupid amounts of speed on the descents. Combined with some of the tricky tight turns and you could find yourself in a world of hurt if you don't watch your speed.

GPS Files for trails in area:

From Temecula, take High 79 east for 18 miles. You will have to come to a stop at the junction of HWY 79 and HWY 371. Continue east on HWY 79 2/10ths of a mile past the junction is a paved road for an RV park/resort on your right. Turn in here and follow the road for 0.3 miles where the paved road makes a right-hand turn while a dirt road continues straight. Take the dirt road and you should already see the start of truck trail. Park in the large open area here.

This was a July ride, so we made arrangements for an early start. We were rolling on the dirt at 7AM. San Diego still had the "June Gloom" thing going but it was sunny with some patches of clouds here and there. After the first 1/10th of a mile the truck trail (labeled 8S05) crosses over a large sandy wash. You will see tracks going up and down the wash as well as a noticeable doubletrack alongside the was wash to your left. Ignore those as you want to go up. That is really all you need to know to navigate this route. When in doubt, go up on the most "main" looking route. When you run out of up, you should be a High Point. Overall the grade of this climb is not bad, some of the steepest bits are in the beginning just after the wash and as you near junction of the Palomar Divide Truck Trail up top. Unlike Nate Harrision on the south side of the mountain which is "on grade" the entire route, the High Point truck trail often nearly flattens our and sometime reverses for short bits as it craves it way up the mountain. While this route is no piece of cake, it is a little easier that Nate Harrison.

As you climb your views to the north grow in scope and impressiveness. At around 1.5 mile you should notice a very steep trail coming down from the truck trail far above. Yeah it's steep and right along the top of a ridgeline. It is hard to notice where it come out on the bottom, but it pops out on the road around 1.9 miles. This trails drops 790 feet in 6/10ths of a mile with a grade of 34% near the top. Can you say Elevator? Judging by the the tracks, this trail currently looks to be almost exclusively used by equestrians, but it certainly looks doable on a bike.

As you continue climbing along you will go by the top of the "Elevator" trail at 3.7 miles. By this time you should be able to see Vail Lake off to the west. Throughout this climb I thought it was cool to which the angle of the lake change as we gained elevation. To the north, Thomas Mountain, San Jacinto, as well as San Gorgorino start to make an appearance.

At 5.0 miles you pass the junction of the Cutca Trail. This trail come down from Cutca Valley about five miles by trail to the east. (And 1,500 feet or so of up steep up and downs). About two miles to the east of here the Cutca Trail intersects with the Aguanga trail which descends about 1,600 feet back down to the RV Park area. I have not ridden or hiked these routes but these trails look like they could be pretty rough on a bike. They are not designated as bike routes, but then again nothing in the Palomar Ranger District of the Cleveland National Forest is designated as such. They simply are not thinking about mountain biking.

Continuing on over the next couple of miles you will have a couple of grade reversals to contend with. Granted they are not significant, but it is often a mental bummer to start dropping elevation on a long climb when you know you will have to gain it right back. Just before the 8 mile mark the truck trail starts getting steeper with average grade of 12 percent over the next 2.5 miles. During the middle of the steeper section you will pass the upper end of the Oak Grove Truck Trail (FS9S09) at mile 9.0 The Oak Grove Truck is exceptionally steep and I was quite glad to not be coming up from that way. From what I'm told the gates at the top and bottom of this truck trail are typically locked to prevent motorized access. Note the forest service numbering has the High Point Truck Trail as 9S09 between this junction and the Palomar Divide Truck Trail further up the mountain.

At around the 10 mile mark you get a glimpse of the top of the lookout tower. Just before you reach the Palomar Divide Truck Trail (FS9S07) at 10.7 miles you will get to enjoy a quick reprieve from the climbing. At the junction you will hang a right and head east on the Palomar Divide Truck Trail. It is a fairly quick transition from the open scrub plants into an oak forest as you work your way around the north side of High Point. At 11.8 miles as you come around to the east side of highpoint and come to a split in the trail. You will want to go to your left and uphill on the spur up to High Point. The gate is typically closed to prevent motorized access. 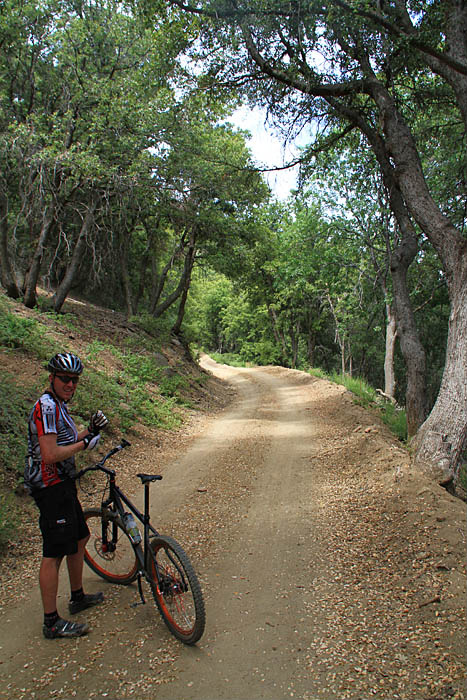 I have been on uglier fireroads

After the climb you just did the final 1/4 mile to the peak should feel like a cakewalk. This spur is an eye opener as the views to the south open rather suddenly. At the top is a picnic table as well as porta-potty used by the rangers who man the tower. Visitors are not allowed to go up in the tower just yet. As of July 2010, the forest service is one signature away from getting all the red-tape taken care of to allow visitors to go up and "visit" the rangers. 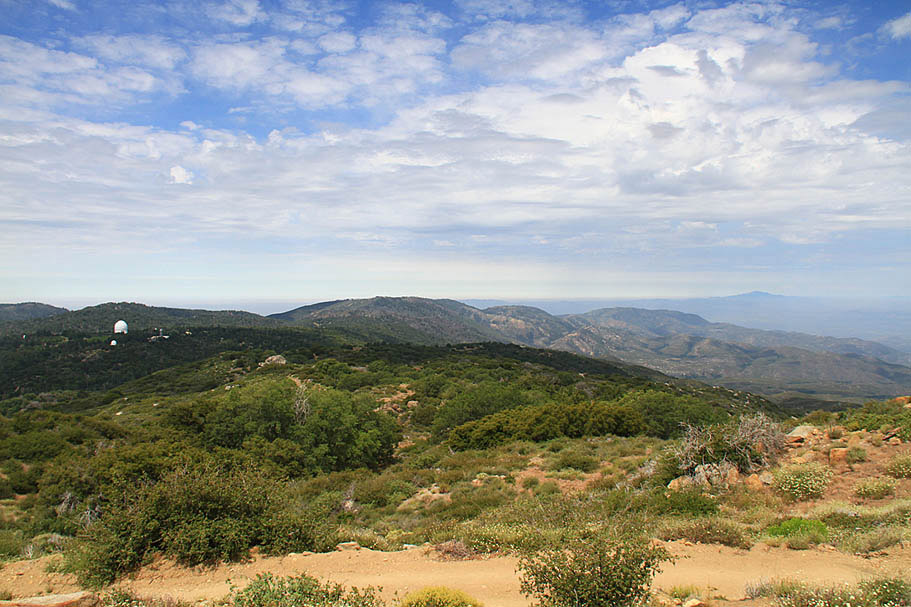 Looking east at the observatory from High Point. 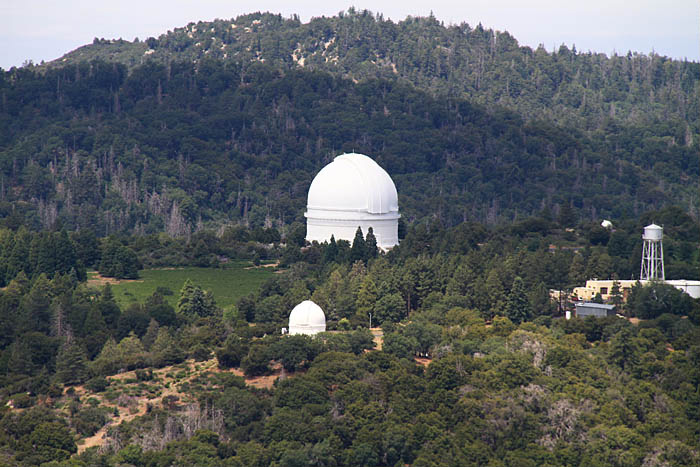 I see the observatory rather often from the various SoCal highpoints I ride to as a small white dot. This time it was a wee-bit closer

The views on this day were pretty cool, but there was some cloud cover to the south that was dulling down the colors quite a bit. I am certainly going to come back here to get some better shots. I bet sunrise or sunset from here absolutely rocks. Even with the muted colors to the south it was still impressive.

Will Valley to the southeast

The trail going down into Barker Valley

Wider shot of the area to the southeast

High Point, elevation 6,113 feet. That has got to be a pretty cool "office" view for the Rangers

Looking to the northwest

Another view of the telescopes to the east-southeast

The view to the northwest from near High Point 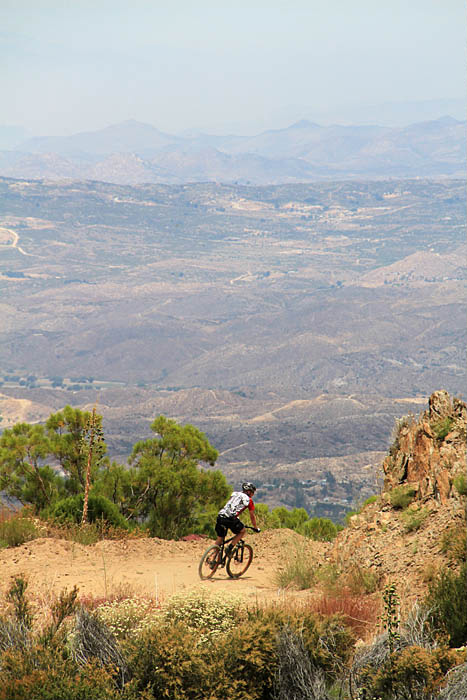 When it was time to turn the bikes back down the hill, it was plenty of fun as we now had 4,500 feet of descent over 12 miles to enjoy. While there were some screaming sections there were also some tight somewhat exposed turns that required all due diligence to keep bad things from happening. The further down we got we could feel the temps rising and by the time we got back to the truck we were once again happy with the decision for an early morning start. I like this route and the possibilities it offers for connecting up with some of the other Palomar offerings that I yet to fully explore. As the state's only Governater would say, "I'll be Back"