Miles Todd is by far the luckiest person I know.

While on our Carrizo Gorge ride on New Years Day 2004.  Miles took quite a horrific fall.   We were on a bit of single track that bypasses one of the many training tunnels.   There are some spots of extreme exposure here and there and we stopped to evaluate one of them.  I decided not to try this one section.   The other two riders, Miles and Eric, both tried it.  Eric dabbed through the scary part and Miles did as well but lost his balance to the wrong side of the trail and went over the side.

The initial drop was about 10 feet near vertical followed by a series of rolling into and over rocks followed by more drops and air time.  All total Miles when about 150 down the cliff/ravine.  It was all over in a few very long seconds but it seemed like it went on forever. 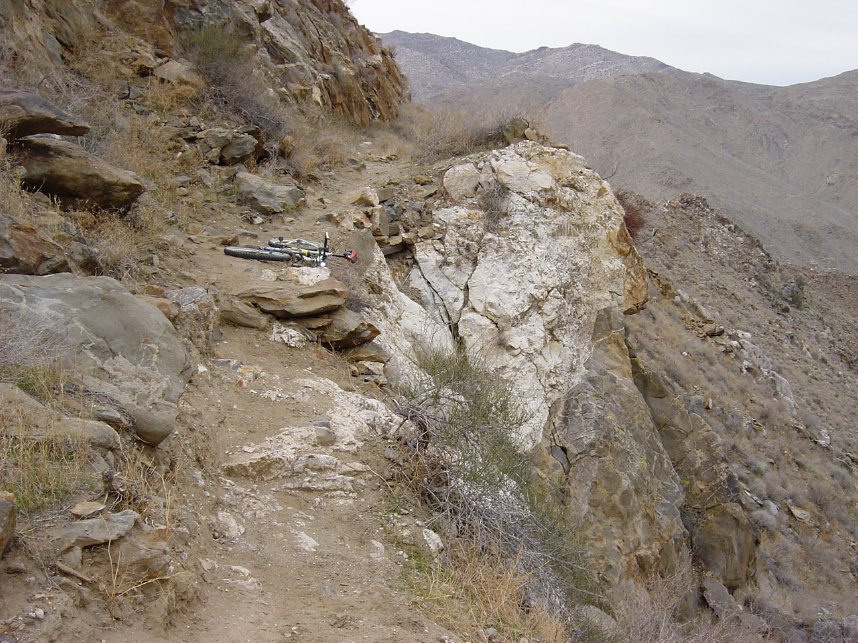 Here is view of the cliff that Miles went over.
It is Steeper that it looks 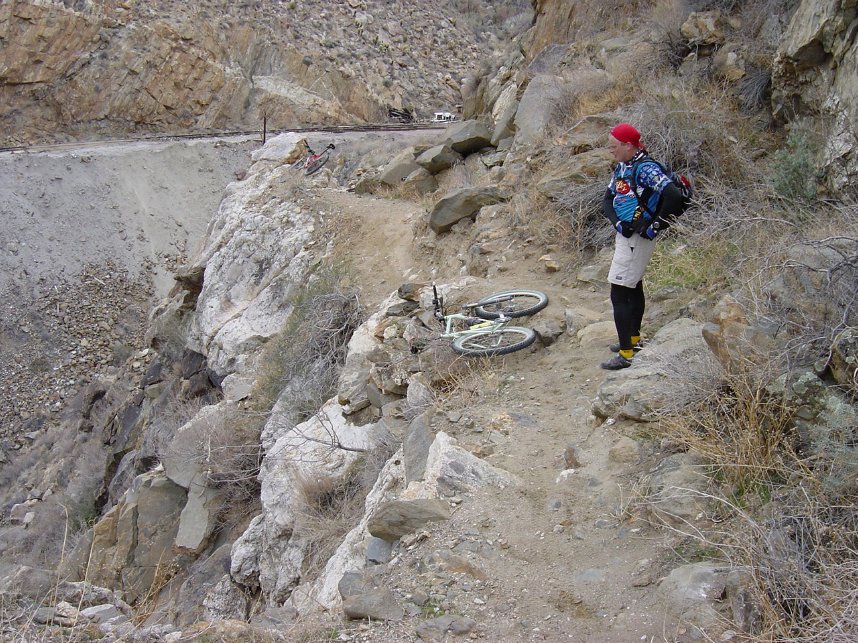 Here is another angle of the cliff 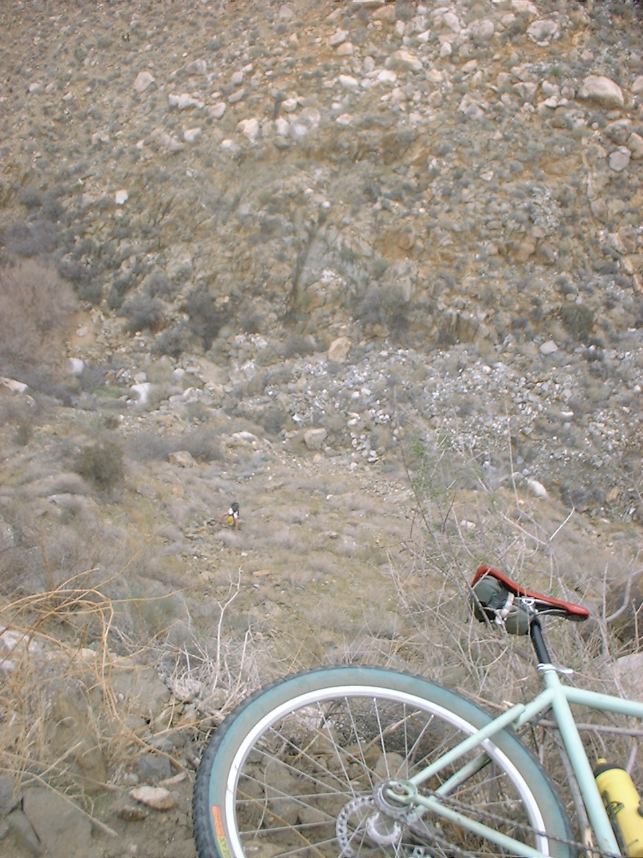 Miles is down at the bottom in this picture with his bike in the foreground. 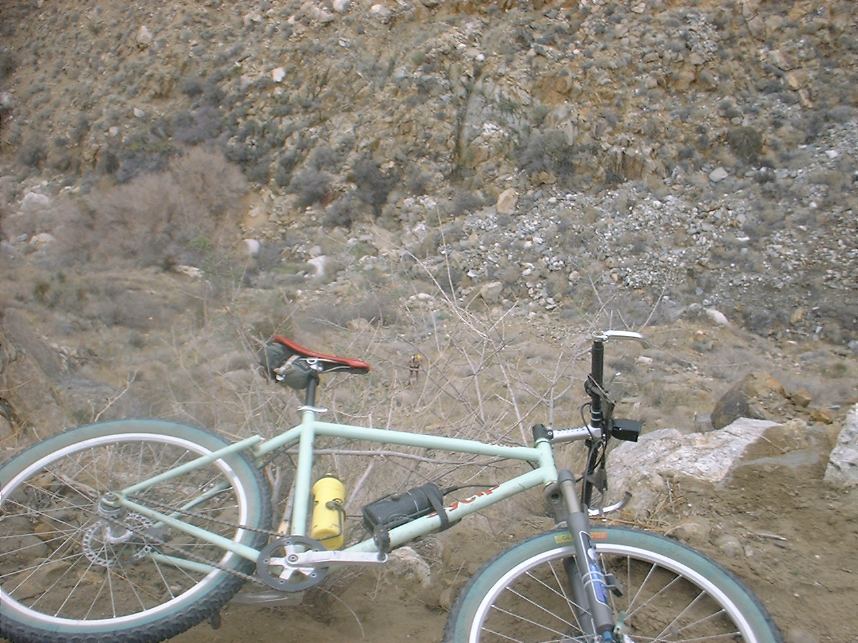 Another shot of the same

Here are are some more shots of the Miles down in the ravine.   The Steeper Than It Looks effect applies here. 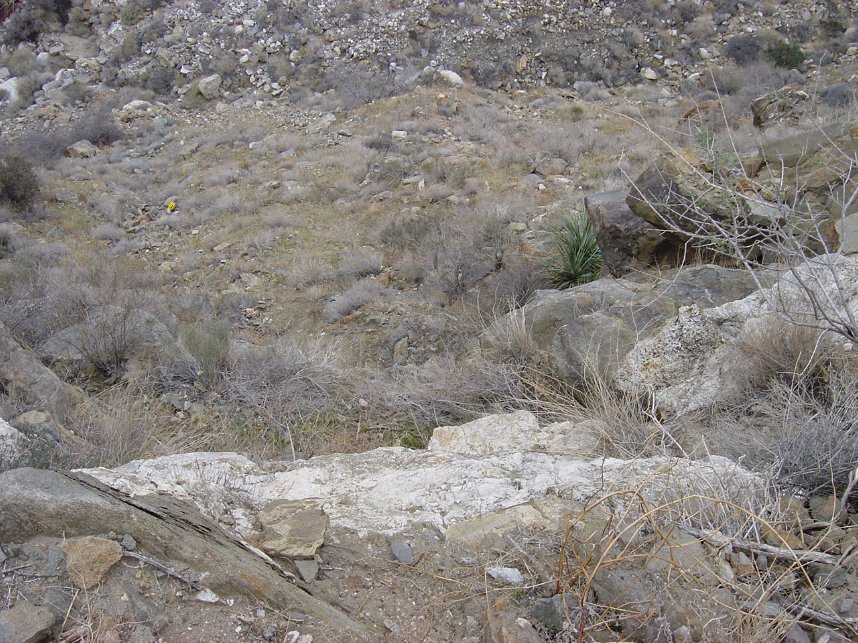 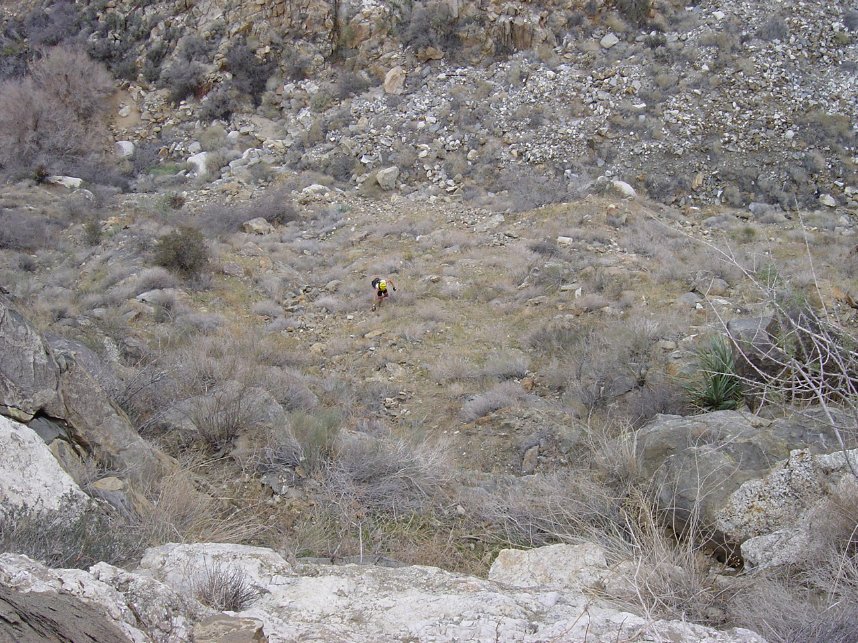 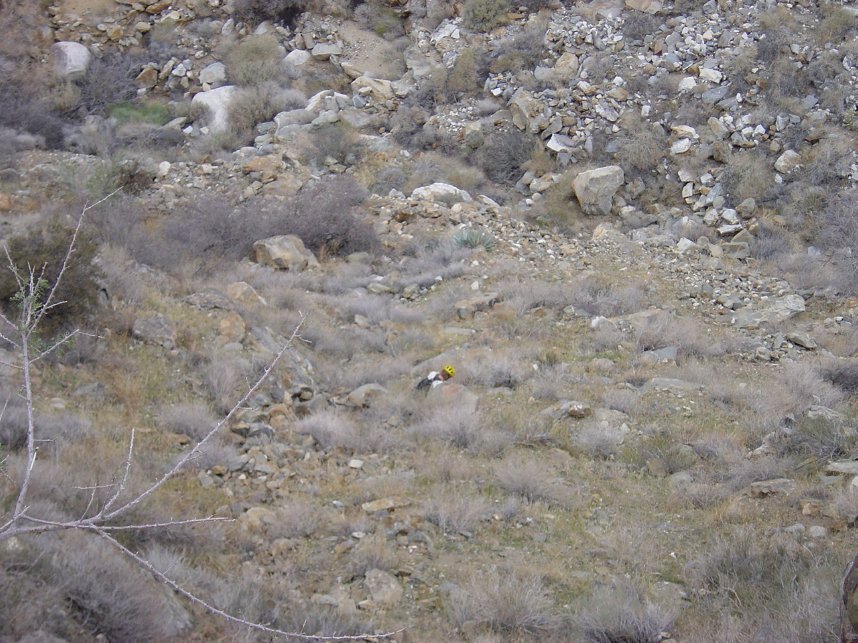 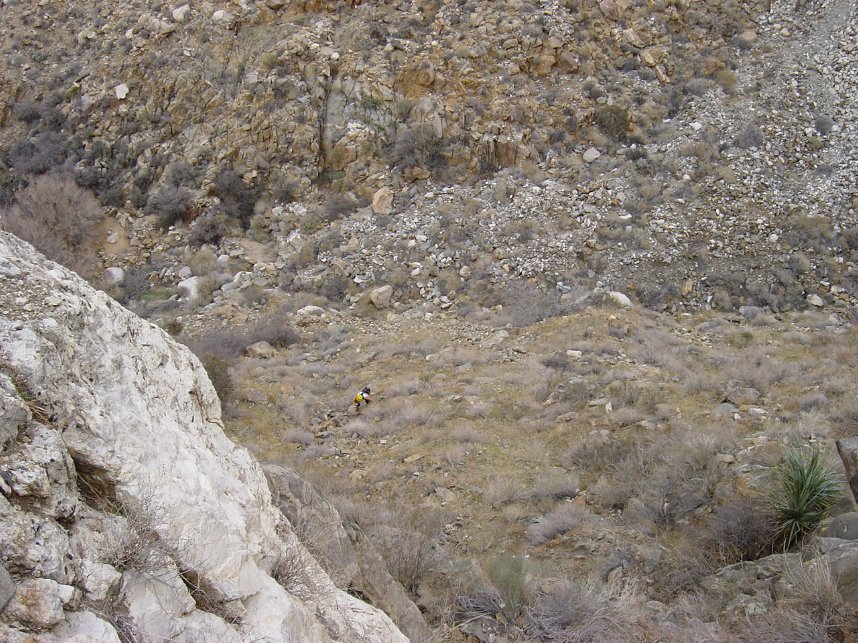 What is absolutely amazing is that Miles survived this fall. I really thought I was watching Miles fall to his death. Looking at the video I think, in addition to "Good Karma" being cashed in, he is lucky that he was went down the ravine shoulder over shoulder versus head over heels. If this was a head over heels fall I can not see how he would have gotten out with serious spinal, head, neck, or collarbone injuries.

Not only did he manage to survive this he also climbed back out of that ravine up near where he went over. Here is Mile's account of that:

Any time they got close to the edge to try it (climb down to help him) they would dislodge rocks and send them my way. I had to keep hollering at them to quit it. They were also convinced that there was no way to get back straight up from where I stopped, and kept hollering at me to make my way around to a shale section. What they didn't realize is that the dirt was at the angle of repose, and I had to step from weedy plant to tough weedy plant to prevent further slipping. i wanted to get to the rocks as soon as I could.What I didn't realize, though, is that the rocks were actually pretty loose, and the more I tried to pull myself up the more the would come adrift. I really, really didn't want to fall back down, so I was super cautious for the most part. A few moves needed to be fast, though, to get to the next foothold before the one bearing my weight gave way. It sucked, and my SIDIs weren't especially helpful on the rock, either. 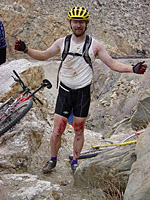 Here is Miles after he climbed out of the ravine.  Many folks asked Miles (in the various MTB related forums) why he was smiling after something like that.

Miles commented that the reason he is smiling in this picture is that he is just happy to be alive.

Here are a few shots the various carnage 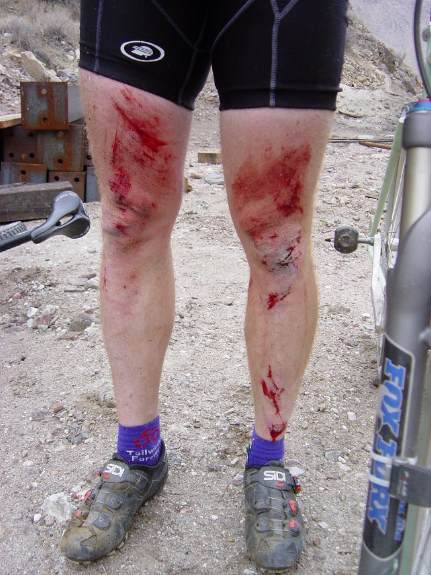 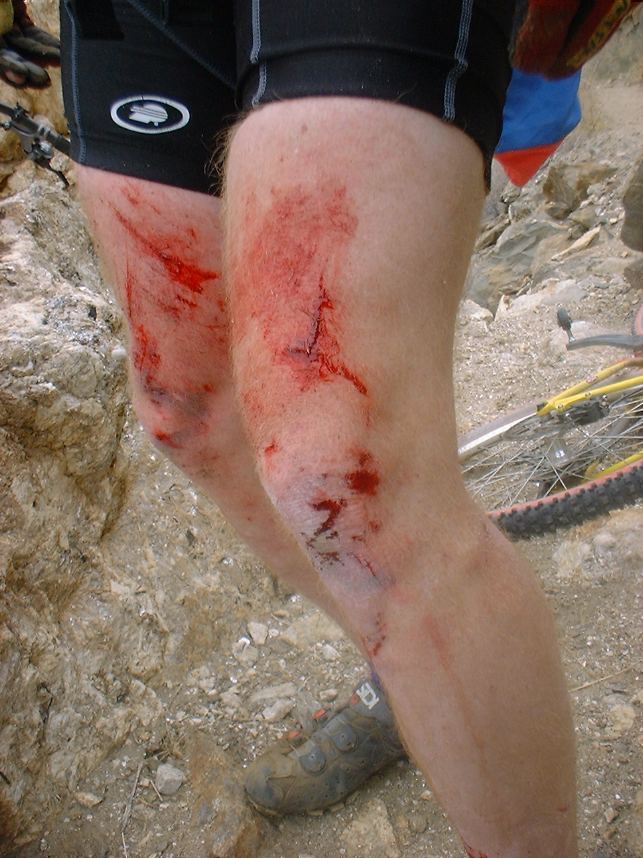 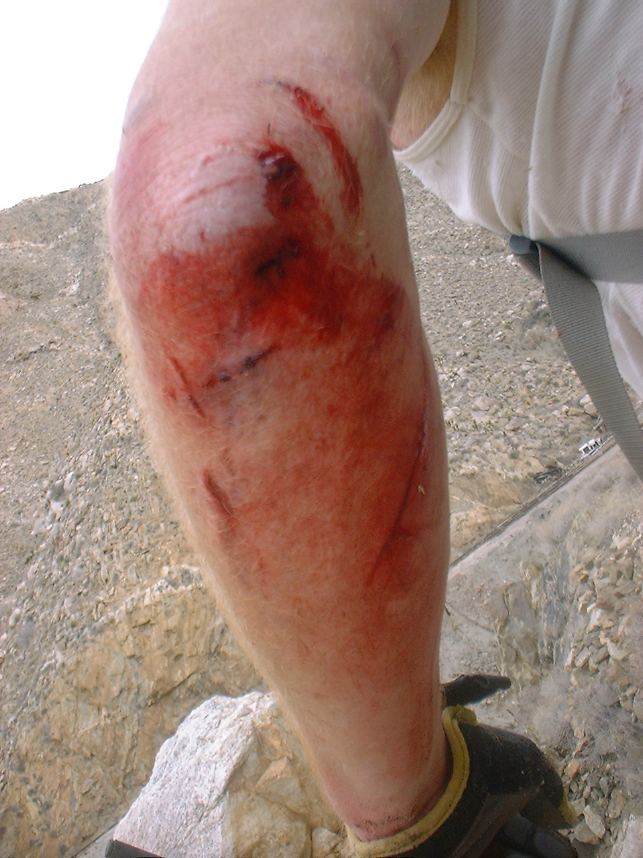 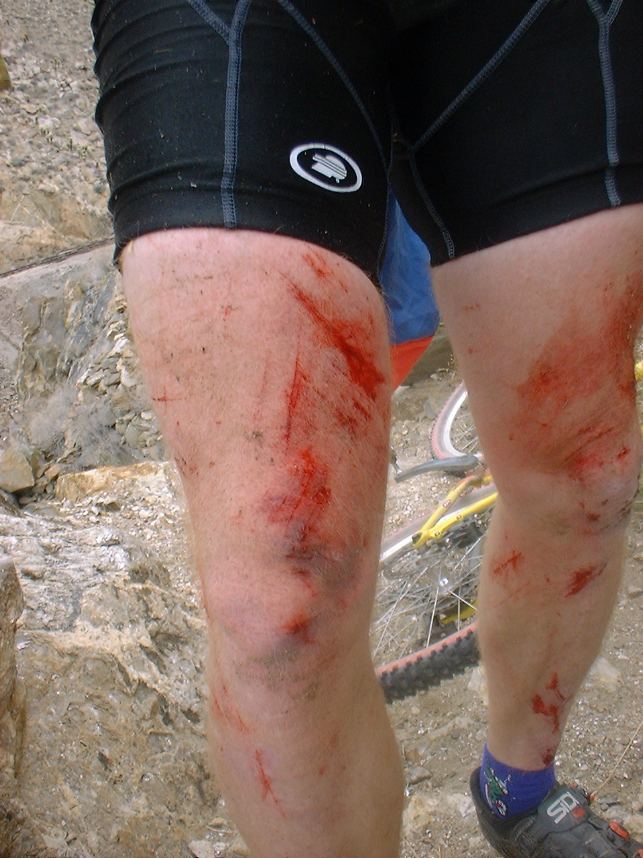 Here is Mile's tally of the injuries posted on alt.mountain-bike.

i have a broken pinky metacarpal (multiple fractures), and a severely sprained index finger on my right hand. my left wrist is sprained, too, which explains the one-finger no-caps typing. i have random stitches here and there, and a whole lot of painful cuts and bruises. am very grateful for my helmet and waterpack for saving my life and my spine. the cuts on my nose and forehead were from my glasses, which broke big-time. after i climbed 150 feet back up to the trail, i had to ride the ten miles or so back to the cars. i'm quite nearsighted, so it made it hard to see the trail very well at all. still, i am glad to have gotten back on the bike right away, because it kept my from stiffening like a board and also helped prevent me from going into shock.

Basically Miles is one lucky and tough dude.

October 2005 Update - Miles was racing again a mere six weeks later.  He was not a particularly happy camper at that race as his wrist were bothering him quite a bit.  The wrista were the slowest to recover and even over a year later at the 2005 24hrs of Temecula his wrists were bothering him again.  Of course we were racing in the rigid single speed category - Come to think about my wrists were hurting in that race too...Yep he has made a full recovery with a dozen or so interesting scars here and there.

If after watching the video you would like to figure out what everyone is saying check out the Voice Dialog here.